A tale of two worlds. Chimneys understand this more than any other part of your home. Fires are lit underneath them, whilst wind, rain and snow batter the tops. So, it is clear that chimneys put up with a lot.

Still, many people basically neglect this part of their buildings, thinking the structure is worry free. This is a big mistake, as they often find out. 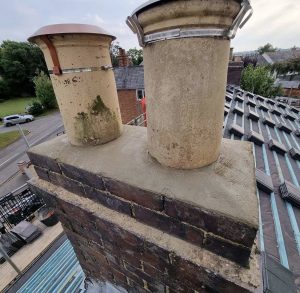 Chimneys are critical parts of your home and they demand regular inspection to make sure they remain at optimum functioning capacity. If the chimney has any faults, they can easily result in structural integrity problems. They can also cause airflow problems amongst other issues.

The result? Safety concerns at the very least. Skyhigh repair costs at the worst. So to ensure your chimney’s long lasting performance, it is imperative that you properly and regularly inspect it for any issues at all.

Just like in the medical line, early detection of issues is key. If you are not very knowledgeable about how to spot issues with your chimney, then you can phone us on 020 8798 2658. Our dedicated and professional team at Roof Repairs London Roofers will be happy to assist you.

Chimneys must be well maintained at all times if you want them to last. Your chimney’s brickwork, flashing, mortar, etc will decay over time. The decay will be faster and more acute if the mortar is left to crumble, as it will leave the brick and stonework without any support. Naturally, this will most likely lead to the collapse of your chimneys.

At Roof Repairs London Roofers, the following chimney repairs services are within the scope of our operation;

We have a wide range of general building knowledge, backed up with years of experience that enables us to adequately carry out chimney repairs like chimney stack repairs and chimney flashing repairs. 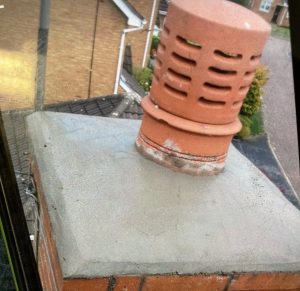 Chimney repair costs are based on a number of factors, such as;

The following list contains the type of chimney repairs that we handle. Please note that these prices are independent of the costs of hiring scaffolding.

The price to repoint a small chimney stack is around £500. This increases to £1000 if the chimney stack to be repointed is a large one.

The costs of installing a chimney flue is based on the size of the chimney and the product quality used to install the flue.

The cost of repairing your chimney pots and flaunching is between £80–£130.

To properly replace all four sides of the lead flashings on the roof, you can expect to pay between £380 and £530.

If your chimney is a gable chimney, then the cost of hiring scaffolding for that height is between £350-£450. 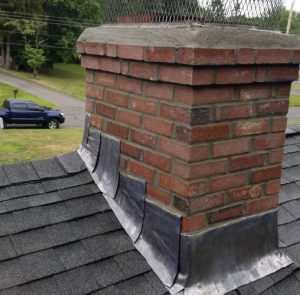 How do Chimneys Work?

Chimneys work based on the fact that hot air rises higher than cool air. The rising air is called the draft. An effective chimney will have a strong draft that will get smoke out of the house.

A chimney with poor draft will cause problems such as a cold room and contaminated air. It can also cause the fire to be put out.

If you have a draft problem with your chimney, you can contact us to get it working effectively again. Book online or phone us on 020 8798 2658.

Your chimney’s flue must be able to maintain very high temperature levels. The flue is the working section of your chimney that takes the combustion from the fireplace beneath it up and out of the home.

The chimney however, is the visible structure built around the flue to protect it.

An unclean chimney will also send smoke and toxic gases back into the room, leaving the air contaminated.

This is why it’s important you don’t run the risk of having an unclean chimney or a break in the chimney materials. Have your chimney inspected at least every year, preferably at the beginning or ending of its seasonal use.

This is how you’ll be able to quickly detect any problems or any potential problems with your chimney. Being vigilant and following up with inspection from professionals like Roof Repair London Roofers will save you hundreds of pounds on repair costs.

The often simple construction of bricks and mortar will develop problems down the line, based on the constant exposure to heat and fumes.

Leaving this unattended will become a major issue for your chimney. To avoid this, ask a professional to inspect your chimney before and after the seasonal use of the chimney.

Burning of wood builds up soot in your chimney. If you leave the soot to build up, over time it will cause issues like chimney fires and so on.

Prevention, as they say, is better than cure. Phone us today to inspect your chimney and remove the risk of a chimney fire in the future. Here’s our number; 020 8798 2658.

Broken capping will allow rainwater in during rainfalls, damaging your flue. So, if you have a broken chimney cap, reach out to chimney repair professionals.

We are your answer to chimney repair near me. Reach out to us today for an inspection. Phone us now on 020 8798 2658, or book online by filling our booking request form.